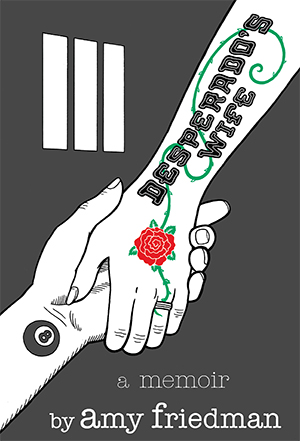 Suburban raised and Ivy League educated, Amy Friedman is an American writer living in eastern Ontario, Canada. Her life seems charmed, and she writes a newspaper column about whatever she wishes—life on the sheep farm she shares with her lover, a well-known famous writer; flying a Cessna; her journeys to South Africa, Northern Ireland and beyond. Then one day a local prison volunteer challenges her to write about the prisons that surround her adopted city.

Prison is in her blood; her father both was a World War II prisoner of War, and she’s always fought for the rights of those less fortunate than she. At a medium security penitentiary she meets dozens of prisoners, among them the chairman of the inmate committee: Will, a handsome, charming Lifer who turned down a college hockey scholarship to join a motorcycle gang. Now 38, he’s serving year 7 of a 13 to Life sentence for murdering another drug dealer. And yes, he’s guilty. But he’s also one of the few men Amy trusts to tell him the truth about life inside, so when prison administrators tell her she can no longer talk to him, she doesn’t listen. Her rebellion leads to her being expelled from the prison, and when her editors refuse to back her up and insist she be allowed to continue interviews, everything unravels.

Before long friends and family and colleagues ostracize her as she falls in love with Will. Ultimately she marries him behind prison walls and becomes part of a world once entirely unknown to her. She raises Will’s two daughters, Sarah and Cass who move in with her; she fights prison officials and politicians. She loses friends and becomes close to Canada’s One Woman Army, writer and activist Claire Culhane. She shares time with her husband in prison trailers. And the fight takes seven years. At last they manage to earn Will his parole.

But in his first 18 months outside, he disintegrates, and so does the marriage. What remains is a stronger, if sadder, woman, and the vital and loving bond Amy shares with the girls she has raised as her own.

$27.95 for Canadian/International orders (additional $5.00 for shipping)

Also currently available on Kindle and on other eReaders including Nook, iPad, Kobo, Sony Reader, and more.

Watch an interview with Amy on the Katie Couric show that aired on July 9, talking about her memoir and introducing POPS, a school club she and her husband, Dennis Danziger, have created to be both a safe haven and a channel for those seeking to heal from the pain of the prison system.  Read more about the Katie episode here.

“Fearless is an overused word. Maybe Amy Friedman isn’t really fearless, but you couldn’t tell that from her memoir, which grabs your shirt in its fist on page 1 and forces you to see humanity in places most of us are too scared to go.  Everybody who’s ever given up on anyone must read this book.” ~ David Dow, author of Autobiography of an Execution

“Desperado’s Wife is a book for anyone who’s ever had their heart broken, their hopes lifted, their ideas dismissed, their wounds healed, or their love confirmed—those things that make us human and vital.  The author’s fierce tenacity to do what’s right and to fight for others will leave you cheering her on, and wishing there were many more Amy Friedmans in the world.”~ Monica Holloway, author of Cowboy and Wills and Driving with Dead People

“Written with grace and compassion, Desperado's Wife is the story of fighting against rules and regulations, all designed, it seems, to break the spirit of those who have the audacity to fall in love with a prisoner. That Friedman does not bend and is able to write about her experience with both grace and compassion is an astonishing accomplishment as well as a siren call to all those wishing to understand this sad universe that is prison.” ~ Richard Jacboy, author of Conversations With the Capeman

“Desperado’s Wife is a prison love story that shows us what both prison and love do to human beings. This deep and beautiful memoir will touch anyone who has ever loved. I am so grateful for this Judith Tannenbaum, author of Disguised as a Poem: My Years Teaching Poetry at San Quentin